Apple held an event earlier today at the Steve Jobs theatre in Cupertino, California. The first product of the day was the Apple Watch series 4.  The screen size has increased and the bezels have been reduced. The screen sizes have been increased by up to 30% which also curve along the periphery. [image source - MKBHD] 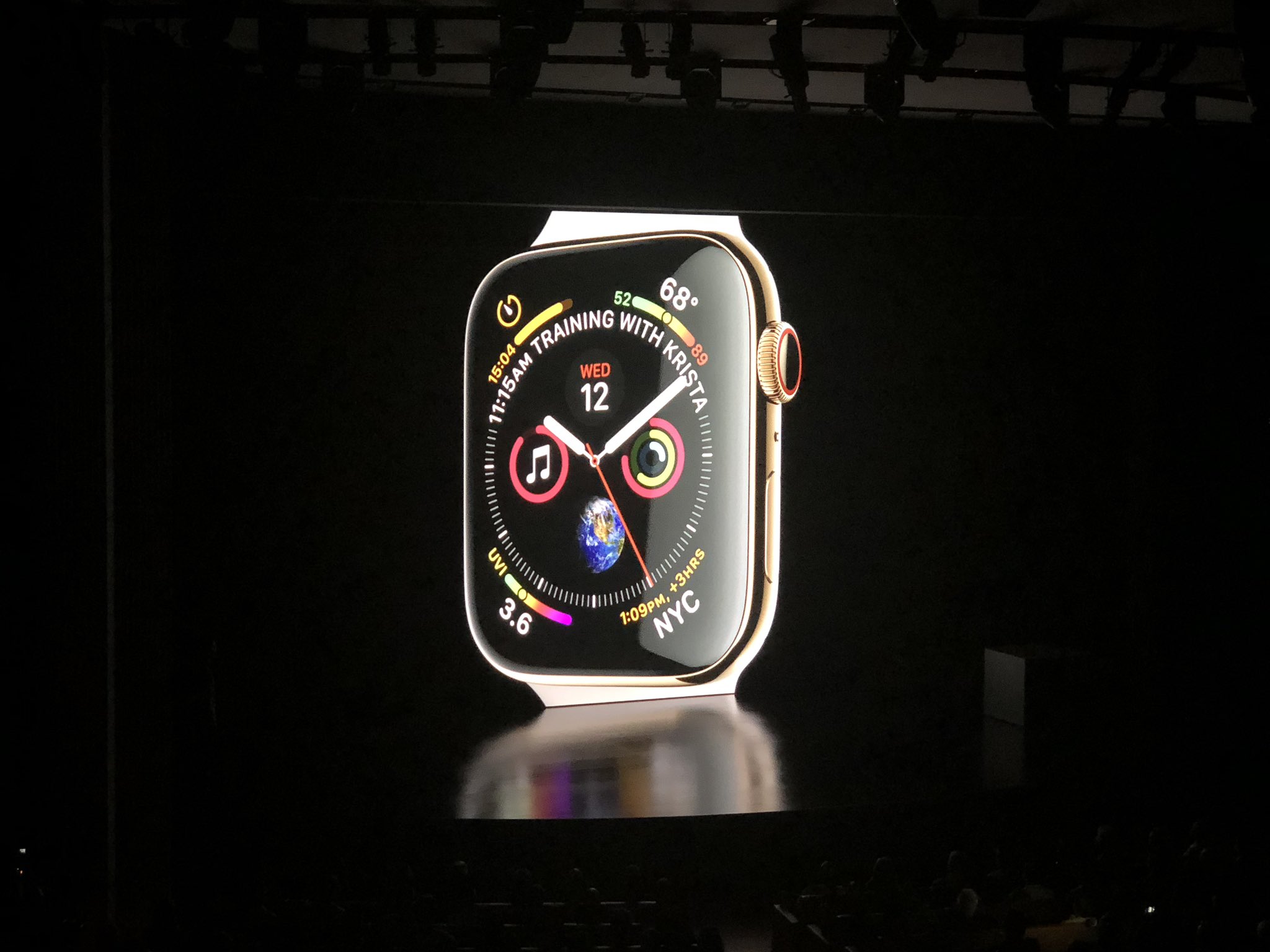 The back is now made of ceramic and the digital crown now features a haptic feedback through certain mechanical changes. Under the hood, it is powered by the new Apple S4 chip which is a dual-core 64-bit chip and comes with a new custom GPU which Apple promises will provide up to 2 times of performance compared to the previous generation. The device also comes with up to 50% louder speaker which allows the watch to take phone calls.

The gyroscope has been improved and can now detect falls. Apple also debuted three new heart rate features which include - low heart rate, heart rhythm and the third feature which is powered by the heart rate sensor and the electrodes, ECG - electrocardiogram. In my personal opinion, this is going to be a revolutionary feature which other wearable devices will have to play catch up to.

The variants include new Aluminium and stainless versions with new color options and bands. All the bands are compatible with previous generation watches. The device will be available for 399 USD for the GPS version and 499 USD for the cellular version. The Apple Watch Series 3 will be available at 279 USD. The availability starts September 21, 2018, and the preorders begin September 14, 2018. Cover pic - MKBHD.

Quite Interesting @qikipedia
The first iPhone virus was the Ikee worm which infected thousands of Australian iPhones. Its only function was to c… https://t.co/nbD7jpCUMi
1 day, 7 hours ago
View all tweets...
News
Airtel WiFi calling: OnePlus 6 and Samsung S10 now support it, here is full list of compatible phones - India Today
Apple CEO Tim Cook Shares Video of WWDC 2018 Scholarship Winners and Their Apps - MacRumors
What's new in Google Photos at Google I/O 2018 - Android Central
'Farmers are being used as political cover by the IFA' - An Taisce - Agriland
Samsung Galaxy Note 9 tips and tricks - Yahoo Tech
A year living with the Google Pixel 3 XL - Pocket-lint
Apple Doesn't Face An Existential Threat, It's Never Been Stronger - Seeking Alpha
Nokia 6 (2018) is officially available in the US on May 6 for $269 unlocked - GSMArena.com news - GSMArena.com
View all news...
Popular Posts